In early 2020, the European Securities and Markets Authority (ESMA) launched a Common Supervisory Action (CSA) on UCITS liquidity risk management (LRM). The purpose of this exercise was to simultaneously conduct coordinated supervisory activities in 2020 and to assess whether UCITS managers comply with their liquidity management obligations.

Earlier this year, ESMA published the results of the 2020 Common Supervisory Action. Overall, NCAs reported that most UCITS managers have demonstrated that they have implemented and applied sufficiently sound liquidity risk management processes. However, the exercise also identified shortcomings in a few cases and the need for improvements in certain key areas.

Following ESMA’s project to review liquidity risk management frameworks for UCITS, on 18th May 2021, the Central Bank of Ireland published an industry letter calling on UCITS managers to “critically” review their LRM frameworks to ensure that none of the adverse supervisory findings are found in their LRM frameworks.

The Letter, which is addressed to all Irish authorised UCITS managers, including both UCITS Management Companies and Self-Managed Investment Companies (SMICs), directs them to carry out a review of their liquidity risk management practices, documentation, systems and controls.

The review should have regard to the findings set out in the ESMA Public Statement and a further list of related adverse findings contained in the CBI Letter, including:

Instances of LRM frameworks that were not clearly defined, adaptable and/or independent

Schedule 9 of the Irish UCITS Regulations (S.I. No. 352/2011) requires UCITS managers to establish, implement and maintain an adequate and documented risk management policy which identifies the risks the UCITS they manage are or might be exposed to.

The Central Bank identified instances whereby UCITS managers were not able to provide a single cohesive documented LRM framework. Instead, an assortment of procedures and processes that referenced liquidity risk were submitted, which when combined, was stated by the UCITS manager to constitute their LRM framework.

The Central Bank expects UCITS managers to employ a cohesive, comprehensive, practical, live documented LRM framework that accounts for all known dynamics relating to liquidity risk. The LRM framework should also take into account the experience and lessons learned from the market and redemption activity in 2020.

Additionally, during the review the CBI identified that UCITS managers were not performing sufficient detailed analysis of their investor base.

In the letter, the CBI also reminded UCITS managers that they must ensure that their LRM frameworks are not unduly influenced by external commercial matters, but are instead driven by, inter alia, the liquidity profile of the UCITS and profile of its investors.

Paragraph 1(a) of Schedule 9 of the Irish UCITS Regulations requires UCITS managers to establish, implement and maintain an adequate and documented risk management policy which identifies the risks the UCITS they manage are or might be exposed to.

Contrary to the above, the CBI identified instances of pre-investment forecasting being carried out in an ad-hoc and subjective manner without a clearly defined or documented methodology overseeing how it is being performed.

Therefore, the CBI has reminded UCITS managers that they are required to ensure that they have in place a documented framework that sets out the expectations and required actions in respect of pre-investment forecasting. This framework should be incorporated into their risk management policies and procedures and it should meet the standards for risk management policies set out in the Irish UCITS Regulations.

In terms of formal liquidity escalation policies, the Central Bank of Ireland identified a number of UCITS managers who did not have clearly defined and documented escalation procedures in respect of liquidity risk. In these cases, specific liquidity escalation thresholds and/or alerts to the board of directors of the UCITS manager were not stipulated at all or where they were stipulated, this was not done in sufficiently clear terms to be operational in practice.

In accordance with the Central Bank’s Fund Management Companies Guidance, designated persons are required to propose and agree with the board of directors of UCITS managers, appropriate thresholds and key performance indicators which trigger immediate escalation from delegates and designated persons to the board.

Cases where no pre-investment forecasting performed

The Central Bank of Ireland identified a number of cases where UCITS managers did not perform pre-investment forecasting, and instead relied on the presumption of liquidity for each investment.

In accordance with paragraph 8(1) of Schedule 5 of the Irish UCITS Regulations, UCITS managers are required, where it is appropriate, to formulate forecasts and perform analyses concerning their individual investment’s contribution to the UCITS portfolio composition, liquidity and risk and reward profile before carrying out the investment.

Additionally, the Central Bank highlighted in the letter the requirements under Regulation 4(2) of the Central Bank UCITS Regulations. These requirements set out granular provisions in relation to the assessment of liquidity risk when investing in any transferable security and also require that the liquidity and negotiability of transferable securities not admitted to or dealt on a regulated market are assessed and documented.

ESMA is assessing whether the role of sponsor support should be modified.

According to Article 35 of the MMF Regulation, MMFs are unable to receive external support, defined as “direct or indirect support offered to an MMF by a third party, including a sponsor of the MMF, that is intended for or in effect would result in guaranteeing the liquidity of the MMF or stabilising the NAV per unit or share of the MMF.

ESMA has proposed amending the current requirement of article 35 of the MMF Regulation under which sponsor support is prohibited.

Over-reliance on the presumption of ongoing liquidity

During the course of the CSA, the Central Bank identified cases where UCITS managers placed an over-reliance on historical performance as testament to the soundness of their LRM frameworks, instead of increasing preparedness for future liquidity events.

The letter reminded UCITS managers of their obligations under Paragraph 9(2) of Schedule 9 of the Irish UCITS Regulations which requires UCITS managers to conduct stress testing and scenario analysis.

Additionally, the letter highlights the requirements under the ESMA Guidelines on liquidity stress testing in UCITs and AIFs.

Oversight of delegates below expectations

The Central Bank identified a number of cases where there was a lack of effective engagement with delegated investment managers. To address this, as required by the FMC Guidance, the Central Bank expects that UCITS managers have regular engagement with delegated investment managers through receipt of ongoing liquidity reporting and evidence of regular challenge and interaction with them.

The Central Bank identified UCITS managers whose designated persons’ oversight and input into the relevant LRM frameworks was not at the expected standard.

The Central Bank identified a number of UCITS managers whose board of directors did not receive liquidity reporting.

UCITS managers are required (through the implementation of their risk management policy) to identify the risks to which their UCITS may be exposed and how those risks are to be monitored and measured vis-à-vis the UCITS positions and those positions’ contribution to overall risk profile of the UCITS.

In accordance with the Irish UCITS Regulations, it is a requirement that the risk management policy of the UCITS manager must state the terms, contents and frequency of reporting to the board of directors.

Finally, the Central Bank of Ireland identified failures with the internal control frameworks within UCITS managers as evidenced by the fact that the frameworks did not identify certain key findings and shortcomings outlined in the ESMA publication and this letter.

The review by the UCITS managers must be documented and must include details of actions taken to address any of the findings in the ESMA public statement and CBI letter.

Furthermore, the review should be completed and an action plan discussed and approved by the board of each UCITS manager by end of Q4 2021.

Managers are continually under increased pressure from heightened regulatory scrutiny and ever-changing legislation. COVID-19 evidenced the increased workload investment managers are under during times of market stress, and in particular, the impact on market liquidity.

Our liquidity risk management solution can reduce this burden and increased workload, and assist firms with meeting these liquidity requirements in both times of market normality and stress. 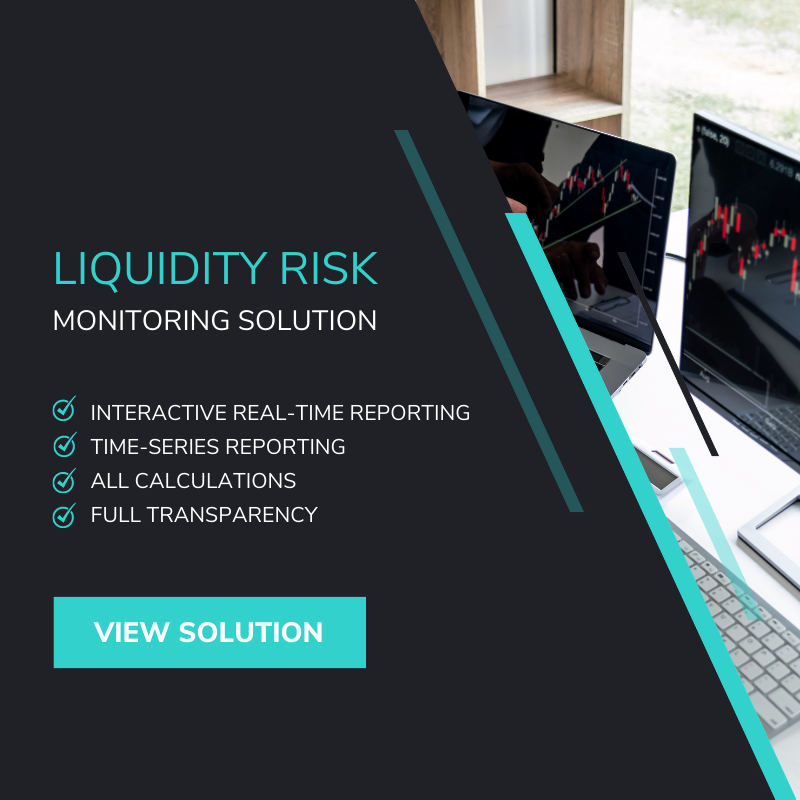 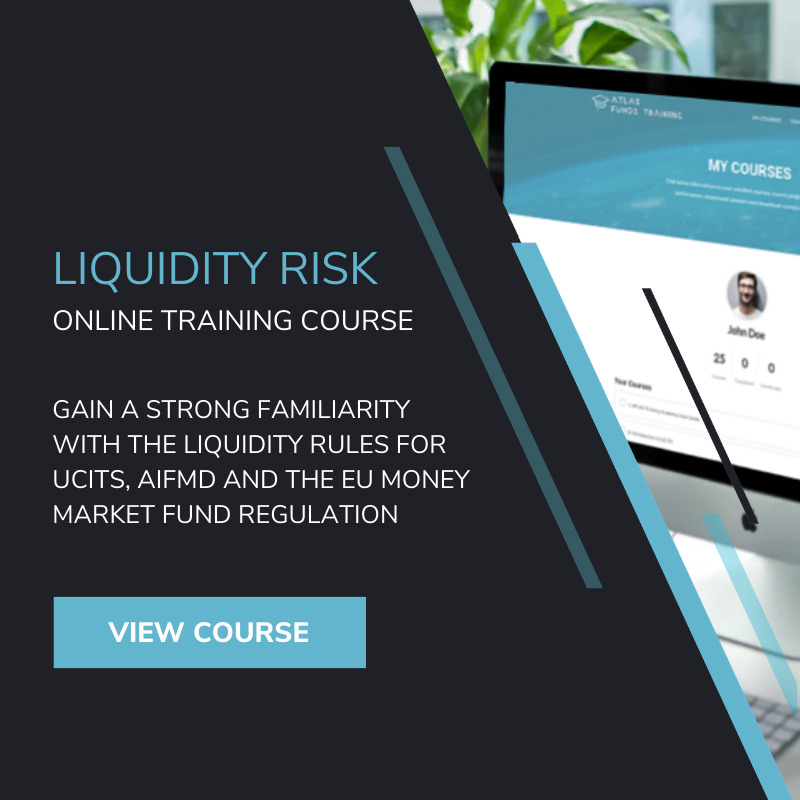